What am I waffling on about?

I'm always on the lookout for alternative foods to take cycling as there are only so many sugary energy bars, gel and chews that a person can eat without severe stomach distress, and believe me I've been there, suffered that.

My husband, while able to eat wheat, is unable to eat simple sugars, so he needs to find portable, easy to digest foods that can give him the energy to get through any bike ride over 50kms. Finding wheat/gluten/sugar free energy foods is therefore a problem without resorting to home baking.

However, I was excited to find a book called Feed Zone Portables: A Cookbook of On-the-Go Food for Athletes (The Feed Zone) . In it were some amazing recipes (many gluten free), including recipes for gluten free waffles. Having never owned a waffle maker it seemed like a good idea to purchase one and give wheat/gluten free waffles a try.

After due consideration and review reading, I settled on the Morning Baker(TM) Belgian Waffle Baker from Amazon. Although quite low priced it had good reviews. I would have preferred something with removable waffle plates for easy cleaning, but it seemed an economic start to waffle making.

I approached the first waffle making session with excitement, just choosing to make a simple recipe for gluten free cheesy potato waffles from Feed Zone Portables: A Cookbook of On-the-Go Food for Athletes (The Feed Zone) . 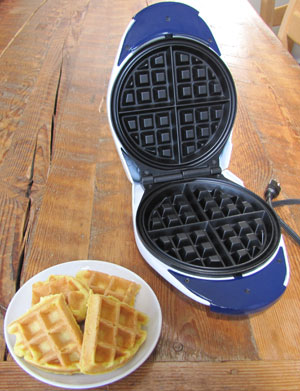 Judge for yourself how successful the very first waffles out of the waffle maker were (see photo). After just 8 minutes baking time we had piping hot, puffy, crisp waffles for breakfast. I just couldn't resist getting out the maple syrup for mine... maple syrup is, after all, good on anything.

This waffle maker is a little fiddly to clean, but it makes superb waffles in 8 minutes. The non-stick waffle plates do initially need oiling, but after the first application I made three batches without further oiling, and no sticking whatsoever.

For an entry level waffle maker the Morning Baker(TM) Belgian Waffle Baker is compact, efficient, well priced and good at the job.