Goodbye Marmite, it's been nice knowing you

Having grown up with Marmite from a baby it appears it might now be a forbidden delicacy.

The second word I ever spoke was Marmite, as a toddler I had a rocking horse called Marmite, 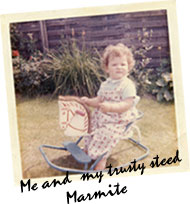 as a rebellious teenager I'd have Marmite eating competitions with friends (and then co-workers) to see who could eat the most spoonfuls of Marmite without yakking up. As an adult I've always loved its dark, evil looking goodness. But no more, my Marmite days are numbered.

When we left the UK almost a decade ago for snowier climes, one of the few things that my mother-in-law used to send me were the huge jars of Marmite. The British exPat shops would stock the small jars, but let's face it, what's the point of Marmite in a small jar?

Having finally exhausted my mega-jar stockpile I was reduced to buying a small jar locally, it wasn't until I got home and was just about to break the seal that I noticed the words of doom "May contain wheat" on the label. I checked all my empty jars for the same message... okay, so I'm that sad I keep all the glass empties... and not one of them had that message on the back.

After investigation, it appears that in the latter part of 2013 Unilever changed the labels to acknowledge the new labelling regulations which meant, because of the lower gluten codex of 20ppm for gluten free, it no longer met the requirements to be considered a gluten free product, however, the formulation hasn't actually changed.

Some of you may be wondering, what is Marmite? Born in 1902 Marmite is derived from spent brewer's yeast, which is purified to make a thick, black, very flavourful food—Yes Marmite haters, it is a food. Its nutritious nature meant that it found its way into soldiers ration packs in World War I, and into prisoner of war camps in World War II. And I'm pretty sure that as a baby my pacifier was dipped in it.

Now you may ask, if the ingredients are exactly the same as they always were, why can't I continue to eat it? Well, you see, it's this squishy thing between my ears called a brain. My brain saw the "May contain wheat" notice on the label and as a result it will not let me put Marmite into my mouth now it's registered that message. And after some truly horrific wheat reactions I can understand why it has wired itself that way, despite never ever having had a reaction to eating Marmite.

My husband gamely tried the abandoned delicacy on his toasted English muffin, however he was not stealthy enough for me to miss hearing the bin lid go back down as he quietly tipped muffin and Marmite into the trash... philistine.

When I go out cycling in my Marmite jersey the shouts of "love it" or "hate it" or just plain "yuk" always ring out, and it's a great talking point. But now I'm going to feel somewhat hypocritical masquerading as a Marmite eater. I may have to turn my picture of Marmite jars to face the wall, and what am I going to do with my Marmite Cookbook? Yes, I did buy that book.

See ya around Marmite, it was good while it lasted.