This article has been provided to wheat-free.org by nairn's oatcakes, manufacturers of wheat free Scottish oatcakes.

A growing number of people are finding that cutting down on wheat can be the answer to niggling health problems. Fortunately there are lots of very good wheat free products available these days, so wheat free living doesn’t have to mean missing out on your favourite foods

Gill Jacobs cut wheat out of her diet about six years ago. “My weight had been creeping up over a number of years and I decided I had to do something about it”, says Gill, 61, who runs a small business in London. "So a friend, who is a naturopath, gave me a weight loss programme which involved cutting out wheat and other carbs. I was really surprised by how easy it was to stick to the diet and how quickly the weight dropped off – within four weeks I’d lost one stone.

"After the first month I gradually started to include carbs like rice and other grains back into my diet, although I continued to avoid wheat. Although I continued to lose weight it took a bit longer to come off but within three months I’d lost two stone. As well as being slimmer I felt fantastic and had loads of energy. Although I eat more carbs now, I’ve continued to avoid wheat because I just don’t think it agrees with me, although I can seem to tolerate small amounts so I will eat bread and pasta when I’m out.

"For breakfast I usually have a smoothie or home-made granola, if I’m hungry mid-morning I have a boiled egg or a couple of oatcakes. I like to have my main meal at lunch time so I usually have something like lean meat or fish with pulses, rice or quiona, and then in the evening some home-made soup".

The forties were proving far from fabulous for Anna Toller. A 41 year old working mum, Anna was suffering from fatigue, headaches and severe digestive track problems on a daily basis. Some days she was constipated and other days she suffered from debilitating diarrhoea. She ran her own business and illness was having a negative effect on both her work and home life. She knew something was wrong, so she consulted her GP. Anna’s doctor diagnosed Irritable Bowel Syndrome. In addition to being advised to take oil of peppermint pills to help control the symptoms, her doctor suggested Anna tried excluding various food groups from her diet to see if her symptoms improved.

After discussing the problem with a complementary health practitioner Anna was advised to exclude all wheat and yeast from her diet. This meant avoiding bread, pasta and products made with wheat, as well as cheese, mushrooms and wine because of their yeast content. In addition Anna was given a course of probiotic supplements to help to eliminate the bad bacteria and replenish the good bacteria in her digestive tract.

For Anna there was light at the end of the tunnel. Her health practitioner was able to trace the likely cause back to the many high doses of post-operative antibiotics she was given following illness and emergency surgery in her twenties and thirties. The practitioner believed these had created imbalances in her intestines which have only now been corrected. After nine months on the diet Anna was clear of symptoms and was able to gradually re-introduce favourite foods back into her diet. Although she now eats a normal diet she tries to avoid eating too much wheat and is more aware of eating a wider variety of different grains and cereals such as oats and rye. Anna now incorporates into her current daily diet many foods that she enjoyed as alternatives to wheat during her recovery process such as oatcakes and rice cakes.

Foods and ingredients which may contain wheat

There are several varieties of wheat free flours available in most health food shops but unfortunately unlike wheat flour there isn’t one that suits all purposes. If you don’t do much baking you are probably better off buying one of the commercially blended wheat free flours. However if you do enjoy cooking you may enjoy experimenting with other types of flour. Certain types of flour are better suited, as follows:

What is the difference between wheat allergy and wheat intolerance?

Wheat allergy occurs when the body reacts to the protein in wheat and releases IgE antibodies in response. Symptoms typically occur within 2 hours of eating wheat and can include:

People with food allergy usually react to even minute amounts of the food in question.

The mechanism which causes wheat intolerance is not fully understood, as intolerance does not involve the immune system. Symptoms often occur after a longer period of time and are usually less severe than with a food allergy. Many people with wheat intolerance can tolerate small amounts of wheat. 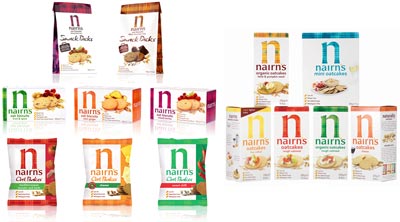