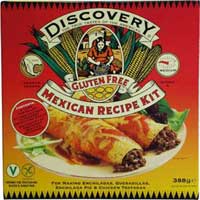 The wheat free kitchen generally followed the cooking instructions shown on the rear of the box for Enchiladas. However we did substitute Quorn mince (30/06/05: no longer wheat free, for details) for minced beef.

Instructions were very easy to follow, but it was important to only microwave one corn tortilla at a time so that they were flexible enough to roll when filled, without splitting.

During cooking the smell was very appetising, and when removed from the oven they looked very good. The first mouthful was bordering on spectacular, the level of spiciness was perfect and the corn tortillas had kept their shape despite being drenched in enchilada sauce.

When it came to awarding marks, we only took off half a star because of the fiddliness of microwaving one corn tortilla at a time.