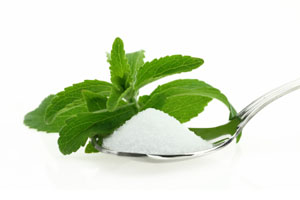 The use of stevia as a sweetener has been steadily growing over the years, with it finally being able to be recognised as a sweetener, rather than as a food additive in many countries. As a result stevia has been widely embraced by health conscious people all over the world in an effort to reduce sugar and calories in their diet.

Stevia, or its full name Stevia Rebaudiana, is a herb originating in Paraguay and Brazil, and has been used as a sweetener by the Paraguayan Guarani Indians for hundreds of years.

Stevia comes in several forms, each type varies in sweetness ranging from 10-300 times the sweetness of sugar:

The benefits stevia offers as a sweetener are widespread. Stevia doesn't adversely affect blood glucose levels so it can be used by diabetics, though diabetics should check with their health care practitioner first, it also has no calorie content.

Some stevia extracts are up to 300 times the sweetness of sugar, meaning that very small amounts can be used to attain the same sweetness levels as with sugar. It should be noted however that high concentrations of some forms of stevia will impart a bitter aftertaste.

Stevia powder or extract is also not a one-for-one substitution with sugar.

Stevia has been shown to have a negligible effect on blood glucose, making it ideal for use by most diabetics, or people on carbohydrate controlled diets. As Stevia contains no calories it makes it a useful tool in weight loss, and is alleged to help minimise cravings for sweet foods, aid digestion, decrease hypertension, and help in the fight against tooth decay.

Stevia is a herb product that has been safely used for centuries. In more recent times it has been tested widely around the world and found to be non-toxic, and as a result has become more widely available in countries as an alternative to other sweeteners.

If you want homemade sugar free cookies or cakes then be prepared to increase the other ingredients in some way to account for the lack of sugar bulk. Also as stevia doesn't caramelise be prepared for your homebaked cookies to not go crisp without the sugar content.

Stevia powder tends to have a long shelf life, however stevia liquids can degrade over time, or if subjected to high temperatures after opening, refrigeration after opening may be beneficial.

Stevia contains no calories, vitamins or minerals in traceable quantities due to the small amounts used.