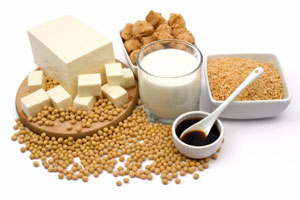 Soya is an incredibly versatile and nutritious protein native to China and cultivated there for thousands of years.

Chinese, Japanese and Southeast Asian cooking uses little meat, replacing it with an alternative source of protein - soya. As soya contains a higher proportion of protein than that of red meat the protein needs of these countries are consequently met quite easily. Soya also provides a vital source of protein for vegetarians and vegans.

It's often difficult to imagine what quantity of dried soya beans will make up a certain cooked quantity. The easiest rule of thumb is that cooked soya beans will approximately double in weight from dried, so for example 100g dried, will produce about 200g of cooked soya.

Soya and unflavoured soya products such as Tofu have virtually no taste and a slightly oily texture. They therefore generally benefit from being cooked with strong spices, seasoning or flavours which they will readily absorb.

They are extremely versatile in any of their different guises.

Dried soya beans contain something called a 'trypsin inhibitor' which must be destroyed by soaking them and then cooking for a protracted time to make them safely edible/digestible. The dried soya beans should be soaked for at least 8 hours or overnight before using for cooking purposes. Different types of soya bean require different soaking times. The soaking water should be discarded and the soya beans rinsed and cooked in fresh water. Always follow the preparation recommendations on the packaging.

As with all pulses, soya beans benefit from being stored in a dark, cool area in airtight containers once packaging has been initially opened.