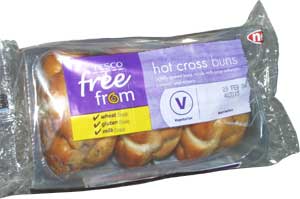 The wheat free kitchen did not initially follow the instructions on the packet, which was to refresh in the microwave for 20 seconds. Instead we split the hot cross buns in half and toasted them on both sides under the grill (this is not an alternative recommended on the packet, which we think is a mistake). When toasted we spread them with butter, just like we remembered having them as kids.

After successfully testing the buns using our preferred method of preparation, the wheat free kitchen then followed the packet instructions. We microwaved the bun for 20 seconds. Then the testing panel got stuck in again. The verdict this time was "its just a hot bun", "need to improve texture for this cooking method", "don't like".

So the overall verdict of the wheat free kitchen was that we didn't think the recommended refreshing method was very good and we didn't particularly like the buns prepared this way. The alternative method we tried toasting under a grill, which was not mentioned on the packet, made them almost perfect and we couldn't wait to try them again, in fact even toasting the remainder of the microwaved bun.

At only 197 calories & 0.5g saturated fat per bun they certainly won't break the calorie bank for anyone watching their weight.