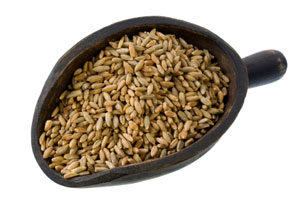 Rye is a grain that is closely related to barley and wheat, however it should not be confused with ryegrass which is entirely different and used for lawns etc. It does contain gluten which makes it unsuitable for a gluten free diet, but if pure rye can be sourced it is acceptable for a wheat free diet.

Rye has a lower gluten content than wheat, being high in gliadin but low in glutenin.

Rye grain can be used for making flour, beer, whiskey and for feeding cattle. Cooked rye berries can be eaten whole or made into a type of breakfast cereal similar to oatmeal, and just about everyone has seen those rye crispbreads on the supermarket shelves.It can also be sprouted and used in salads or sandwiches.

As with all flours, rye flour should be kept in an airtight container stored in a cool area, or in the freezer, and used by its 'use by' date.