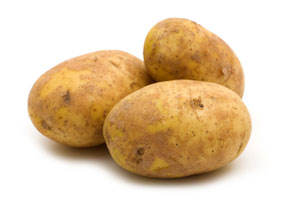 The potato was originally native to the Andes and cultivated by the Inca and other Pre-Columbian people of the region. Over time potatoes spread throughout other Native American groups and became a staple food.

In the late 16th Century potatoes made it to England, and by 1650 potatoes were the staple food of Ireland, and began to replace wheat as the major crop elsewhere in Europe, being used to feed both people and animals.

Potatoes are carbohydrates, and of course wheat free and gluten free. They are versatile, cheap and wherever you go you'll usually find potatoes on the menu (in some form).

There are thousands of varieties of potatoes, however most of us only ever get to see and eat the common varieties that are for sale in the supermarkets. To find the more unusual varieties you'll generally have to locate independent shops or farm shops/markets specialising in providing the more unusual produce.

Potatoes are divided into two different crops, new crop and main crop (old) potatoes. Each variety of potato has its own texture and should be chosen according to the proposed use.

Wash and dry floury potatoes, lightly rub with oil if a crisper skin is desired. Put in oven approximately 375°F (190°C) for 1-2 hours depending on size, or until they are cooked completely through to the centre. Inserting a metal skewer through the potato will also help it to cook completely on the inside as the heat from the metal will transmit into the centre of the potato.

Peel waxy, salad or all purpose potatoes and either leave whole for small potatoes, or cut into even sized chunks. Bring to the boil then simmer until cooked through. Avoid vigourous boiling all the way through cooking as the potatoes will disintegrate.

Peel and chop floury potatoes, cut into small pieces, the smaller they are the quicker they will cook. Bring to the boil then simmer until tender. Drain the water thoroughly from the potatoes then add 1-2 tablespoons of milk, a small knob of butter or low fat spread and freshly ground black pepper. Mash well until the potatoes are smooth and lump free (do not use a food processor for this as the potatoes will end up with the consistency of glue).

Peel floury potatoes and cut into similar sized chunks. Parboil for 5 minutes then drain them thoroughly, when dry shake them around a bit in the saucepan or sieve to rough up the surfaces to create a crispy edging when roasted. Tip into a preheated roasting tin that has hot fat in it and coat the potatoes well with the fat. Roast for approximately 45-60 minutes at about 400°F (200°C), turning occasionally to ensure even browning, being careful not to knock the crispy bits off in the process.

Our potato wedges are a slightly different take on traditional roast potatoes, and are a real hit with the kids, at barbeques, winter comfort food, light lunchtime snack, in fact anytime.

Potatoes should never be eaten raw as they contain toxic compounds called glycoalkaloids, which are partly destroyed by cooking at high temperatures. Glycoalkaloids may cause headaches, diarrhoea, cramps and in severe cases coma and death, however poisoning from potatoes is very rare.

Green potatoes can also be poisonous, any green areas on potatoes should be removed before cooking, and completely green potatoes discarded.

Potatoes should be stored in a cool, dark, dry and well ventilated place, this will prevent them from sprouting or turning green. They can be stored in the fridge but it's not necessary.

All purpose
Used where no particular potato type is specified. All purpose types include Desiree, Maris Piper, Wilja.

Floury
These are perfect for baking, chips, mashing and roasting as they have a low moisture and sugar content, and are high in starch. Floury types include King Edward, Marfona.

Salad
These are generally cooked in their skins, preferably boiled, and have a slightly waxy texture. Salad types include Jersey Royal, Charlotte.

Waxy
These are best roasted or boiled but don't mash well, because they have a high moisture content and are low in starch. Waxy types include Charlotte, Kipfler, Cara.